We are overhauling the arrangement of the topics, as we move to superphysics.org so expect some links to be broken
The Free Trade Alternative to Bretton Woods and Regionalism as the EU and ASEAN

How Multilateral Pool Clearing Can Solve Currency Crises and Bilaterialism

This is the simplified version of EF Schumacher’s Multilateral Clearing which was used by Keynes for his International Clearing Union and Bancor proposal in Bretton Woods, which were not accepted as they would regulate world trade. We build on Schumacher’s ideas and merge them with those of Adam Smith to create a multilateral free trade system which is based on gold or grains, as an implmentation of cross-border Pantrynomics .

There are advantages in settling international payments for goods and services by way of Clearing. 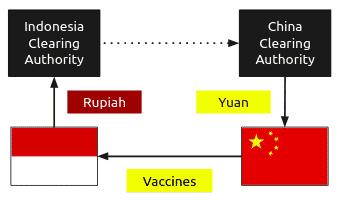 A strict bilateral trading system has disadvantages. It would be better to have a multilateral trade where no country would need to balance its trade with any one particular country, but is free to buy even from countries which are not its customers and to sell even to countries from which it does not buy.

The question then arises: Can we have multilateral clearing?

Assume that there is only the US, Britain and Poland:

Multilateral clearing implies that Britain should have no balance or remaining obligations. But Britain is released from these obligations only if the Americans are prepared to exchange their GBP-balances for Britain’s PLN-balances.

Why should they be prepared to do this?

GBP-balances (on our assumptions) are preferable to PLN-balances, because Britain has achieved “balance” in trade, while Poland is a deficit country.

Why should the Americans exchange a better currency for one that is worse?

If they can be made to do so, then we can have multilateral clearing.

Multilateral clearing exists in Europe. Germany forces the surplus countries to agree to the necessary exchanges of uncleared balances so that:

How can multilateral clearing be achieved without the application of force?

*Schumacher Footnote: This paragraph merely states the theoretical principle of Pool Clearing. In practice, the channeling of all payments through the Clearing Fund can be made hardly noticeable to any individual trader. The established banks would be authorised to make and accept payments against documentary evidence and would merely settle the uncleared balance with the Clearing Fund. They would also continue to finance home importers and exporters in much the same way as before. Whether or not certain categories of in-payments or out-payments are to be made subject to special permit, is a question which every government has by itself. Any foreign exchange control is equally compatible with Pool Clearing.

Assume this goes on for 12 months and each Fund has 3 outcomes:

*Superphysics note: In Pantrynomics, the excess currency stays locked up and is not used to buy Tbills. This makes the currency inert in order to reduce inflation. However, this might also starve the country of cash to cause a recession. That’s why the other countries will be encouraged to travel to deficit countries and avail of their services, likely via tourism and hospitality, to empty the Clearing Fund.

What would be the position of ownership of the deficit countries?

It follows that America owns a balance of 10x in Poland. A GBP-balance, which the Americans could own, simply does not exist. Thus, the surplus country owns the cash balance in the Clearing Fund of the deficit country.

But what if there are more than three countries?

They belong to whom? What proportion of the zloty-balances and of the guilder-balances belongs to America and what to Britain?

This is the decisive feature of “Pool Clearing”.

*Superphysics Note: The balances lose their identity because currency destroys the traceability. Pantrynomics uses agreements to maintain the identity and traceability to be able to disentangle world trade. If a country leaves the pool, then its promise-to-import will be enforced. Otherwise, the pool will absorb the loss.

The Pooling of Local Currency and the International Clearing Union

The pooling of balances arises automatically out of the system’s mechanism. No surplus country is ever called on to exchange one balance for another.

To multilateralise such a system, America would have to be forced against her immediate interest to swap her GBP balances against Britain’s balances in the deficit countries. There would be no country strong enough to enforce such swapping on a worldwide scale.

Under Pool Clearing, this whole question never comes up.

Any such cash balances in the various Funds are always the result of a deficit in the total trade of the countries in question. Mere bilateral trade deficits do not create the appearance of uncleared balances, unless they represent at the same time deficits in total trade.

But we still need to create some international machinery to give to this process a legal form. An “International Clearing Office” can be set up as Trustee in the pooling of uncleared balances*.

*Superphysics Note: In the Pantrynomic system, this is the job of ISAIAH. The main difference is that Schumacher’s system ‘sells’ the idle cash to the money market. In Pantrynomics, the idle cash stays idle and does not earn interest because its only purpose is to circulate world trade. This is because Adam Smith, from whom Pantrynomics is based, saw Tbills as part of the Mercantile system. This removes the need for an International Clearing Office and International Pool, as well as the costs associated with it. However, this creates the need for a deposit and withdrawal sysetm for the citizens of the Pool to travel to other Pool-member countries to avail of ’nonindustrialized’ services instead of goods. This subsystem is called Resource Banking. Instead, idle cash in net-importer-countries are emitted back to the economy through foreign tourists coming in, and the outsourcing or export of services.

How to Fix Afghanistan

Social
Back to Index
Next Part 2